St. Matthäus, or St. Matthew´s in English, is a protestant church just outside the ancient Sendlinger Tor Square in downtown Munich. I pass this rather modern construction almost every day, and it was not until I came up with the idea to start the series “Church Chic” that I finally laid foot inside.

While I personally would not call the exteriors as completely unsightly, St. Matthäus modern approach rather resembles a taste in architecture that was very standard for every post WW II construction at that time.

The inside, however, changed my impression momentarily though. I found the layout and the open presentation of the round transept as quite airy and impressive. No unnecessary details, just a simple yet elegant focus on what this space is intended to be. A place to meet and worship.

The building is the successor to Munich´s first protestant church which was built back in 1833. With the takeover of Hitler in 1938, the original church was demolished within three weeks by the Nazis due to “urban development” reasons. While there have never been any official statements, it is rumored that this happened due to refusal of the Bavarian Church to go along with the United Reich Church proposed by Hitler.

It took altogether 17 years after the war ended that St. Matthäus was to be rebuilt. In 1955, the modern construction by architect Gustav Gsaenger was inaugurated and opened to the public. This new form of modernism to sacral architecture was quite controversial at that time. The curved lines outside and inside the transept very soon received the nickname “Herrgotts Achterbahn”,  “Almighty´s Rollercoaster”. 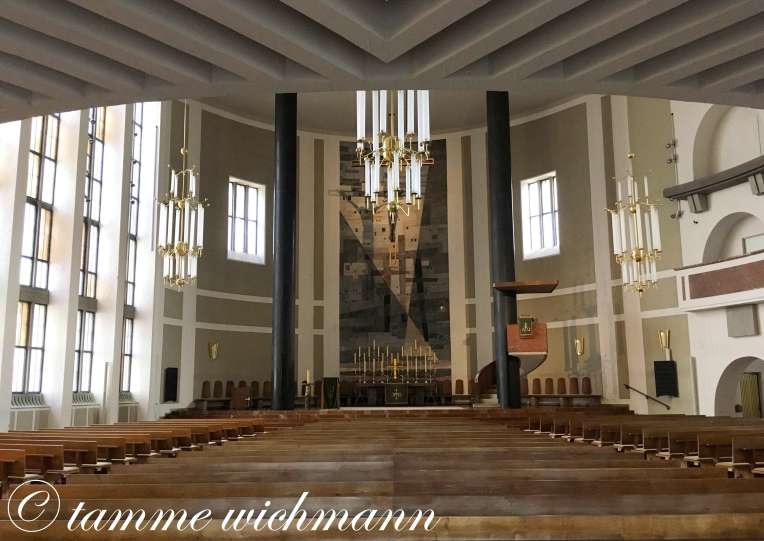 Even though most protestant churches in Germany are decorated in a rather modest way, I really enjoy the large amount of daylight that lightens up the space without needing electricity.

St. Matthäus can easily be reached by metro, tram, bus or by foot (Sendlinger Tor). The entrance to the church is located on Nußbaumstrasse, the smaller side street of the busy main road Lindwurmstrasse.

After having been inside, there is one major rule that I had learned once again: Do not judge by the outside! Take the time to reveal what lies behind…